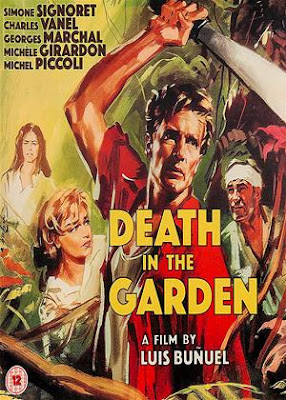 From the outside looking in, Luis Buñuel’s Death in the Garden seems a pale imitation of a big budget American adventure film. This Mexican-French co-production, with its South American villages, rain-drenched jungles, and marooned European heroes, feels at times like a European answer to John Huston’s The African Queen (1951). After getting trapped in the middle of a populist uprising against a corrupt government takeover of a mining outpost, a band of mismatched misfits flee into the Brazilian rainforest. Two of the principle actors in particular feel like riffs on established Hollywood figures: with his beefy build, rough-hewn good looks, and no-nonsense attitude, adventurer Shark (Georges Marchal) feels occasionally like a French Kurt Douglas or Burt Lancaster; with her icy attitude, withering disdain, and sharp beauty, greedy prostitute Djin (Simone Signoret) appears a Buñuelian take on Marlene Dietrich.

But despite appearances, Buñuel brings his particularly singular worldview to bear in this film, creating something that stands far apart from its proto-blockbuster predecessors. For starters, it demonstrates the Spaniard’s trademark hatred for authority, whether it comes from the state or the church (although, due to his Catholic background, in many of his films these two forces are one and the same). The government officials who seize the mine and hunt Shark, Djin, & co. are bizarrely aloof and detached in their cruelty. For them the slaughter of unarmed miners and the humiliation of local townspeople is positively blasé. (In one of Buñuel’s only surrealist flourishes in the film, a dead rebel is “executed” by firing squad to maintain appearances.) The local Catholic church is also portrayed as totally impotent, both incapable of stopping the exploitation of the natives and, one expects after watching them, unwilling as long as they aren’t good Christian converts. This is best demonstrated in Father Lizardi (Michel Piccoli), one of the jungle escapees who time and again commits the only true sin one can commit in a Buñuel film: trust in mankind’s better nature. In a running joke, Lizardi repeatedly “personally accounts” for people who turn traitor and betray him and his group. That’s he’s doomed to die for his foolishness in rejecting Buñuel’s misanthropic nihilism is a given from the moment we first see him. Though belonging to the oft-overlooked Mexican phase of Buñuel’s career, Death in the Garden is nonetheless as caustic and vicious as anything he ever made.
Posted by Steve Kopian at June 18, 2020