Brief thoughts on the We Are One Festival Talks

The recently completed We Are One Global Festival was put together by 21 festivals around the world with the intention of raising money for people and organizations impacted by Covid 19. As part of that they ran a number of prerecorded talks with actors and directors.  I watched a number of them and here are some quick thoughts. 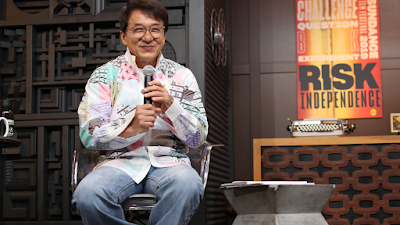 Cinema Cafe With Jackie Chan from Sundance
Over the years I have seen Jackie Chan speak numerous times. I've actually seen him in person three times when he came to NYC for the New York Asian Film Festival. Jackie is the supreme showman and I really don't care what he has to say only that I'm in the room to hear it because it will make me smile. This talk with Jackie is exactly like that. It's Jackie being Jackie which means its a combination of real information mixed in with Jackie telling well honed stories and always playing to the crowd. This was a blast and I actually had it on a couple of times while I was working just because its Jackie.

In Conversation with Guillermo Del Toro From Marrakesh
Another stunning talk with a great filmmaker. Every time I've seen Del Toro speak in person I've wanted to invite him out for coffee afterward to continue talking movies. One of the most approachable of any director I've come across he has pulled back over the years simply because if he didn't he would get swarmed. Here Del Toro talks about everything and anything and he manages to hold our attention with such skill that you never want it to end. What I loved about the talk is that despite seeing and reading numerous interviews with the great man he still manages to reveal some unknown bit about one his films that you never heard before.

Locarno 2019 Pardo d'onore to John Waters
Hands down one of the greatest talks I've ever seen. I may not like Albert Serra as a filmmaker but his talk with John Waters kicked serious ass. Talking about everything Waters ,is just amazing. WHile I've heard his hitchhiking stories before he still managed to make them seem knew. Despite having a love affair with Waters work I loved that I learned a great deal (like his films never really made any money). This was the best filmmaker talks to filmmaker talk I've seen.

On Transmission: Ang Lee in Conversation with Kore-eda Hirokazu from Berlin
Two titans of cinema sit down and talk about film and you just fall into it. While I am a Kore-eda fan I am not really an Ang Lee fan but watching these two men talk about their work and their ideas about cinema and each others films made me want to go back and watch the films again

Rendez-Vous with Alain Delon from Cannes
I have always been a Delon fan but I never had a chance to hear him talk. Watching this hour long talk not only gave me an insight into his films but also his way of doing things. I wish this had been longer.

Rendez-Vous With Zhang Ziyi from Cannes
Almost to hours with one of the great actresses of the screen. It was a wonderful look into her life and work.

TIFF Talks: Viggo Mortensen & David Cronenberg on CRASH
I think it's clear the best way to get David Cronenberg to talk is to have him talk to a friend. I've seen Cronenberg talk in career retrospectives, at press conferences and after a new release and there was something about the way that he shot the breeze with Viggo that made this one of the most enjoyable. There was no pretense in the questioning just genuine curiosity and the result was unrehearsed responses that delighted.

There were other talks of course (Tessa Thompson with Jane Campion, Song Kang-ho with Bong Joon-ho, Olivier Assayas with Claire Denis, Tantoo Cardinal,Alejandro Iñárritu with Marina Abramović, and Francis Ford Coppola and Steven Soderbergh) but I either missed them entirely or only caught a small portion.

I do hope that if we are gifted with another We Are One Festival they will do more talks because what I saw were all wonderful. 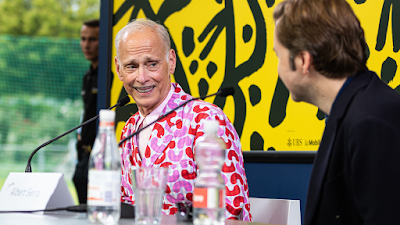 Email ThisBlogThis!Share to TwitterShare to FacebookShare to Pinterest
Labels: q&a, We Are One