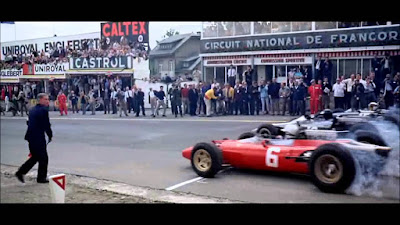 Forget Phase IV (1974). Grand Prix, the story of four Formula One drivers competing in the 1966 race season, is the best film Saul Bass ever directed. Even more impressive is the fact that he didn’t technically direct it, John Frankenheimer did. Brought on board as the visual consultant for the montages and title sequences, Bass’s work only really appears in maybe the single hour of racing footage scattered throughout the three hour runtime. So why do I say Bass directed it? Because his creative imprint is stamped so firmly into the film’s creative DNA that Frankenheimer’s presence seems to vanish, leaving only Bass’ restlessly innovate pop art sensibilities to break and rebuild the cinematic canvas.

Consider the opening titles (which come after an extended overture title card straight out of a big-budget Hollywood epic). As the the credits flash on the screen Bass shows a group of racers getting ready for the start of a race. Bass fills the screen with disjointed shots of exhaust pipes and tire ridges, wrenches tightening screws and flickering air pressure gauges. The images are then doubled, quadrupled, vigupled like an Andy Warhol portrait. As the racers hunker down into their cockpits, the editing gets faster and more frantic, cutting to hands, eyes, faces, watches as the revving of engines gets louder and louder. As the race explodes into action, the camera teleports high into the sky and follows the cars with long, sweeping pans. Suddenly the frame breaks into three vertical rectangles like comic book panels, one showing the pedals, one the hood, and one the gear shift of the same car at the same time. The fragmenting continues with the panels now going horizontal, now vertical again, now horizontal and vertical simultaneously. In these scenes we see the splintering of time and space as one imagines a racer actually experiences them at a hundred miles per hour. It’s a rowdy, roaring, ecstatic hallelujah of movement and speed.

The other two hours of the runtime that follow the actual characters are commendably solid in their own way, if not somewhat strained by the film’s needing to make time for each of the four protagonists. Yet one marvels at the convincingly human drama and the melancholy mood of the third act even as champions celebrate in the winner’s circle. But still, this is Bass’ film. His visions of speed and adrenaline reign supreme.
Posted by Steve Kopian at June 08, 2020