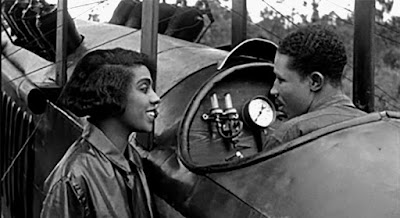 Filmed in Jacksonville, Florida with a cast and crew of African-Americans, Richard E. Norman’s The Flying Ace was one of a series of “race films” made in the first half of the twentieth century. These were movies made by black creatives that catered to black audiences, carving out a rare space in American art unmolested by whiteness. Of the less than one hundred that survive, only The Flying Ace remains from Norman’s own studio which financed productions by shooting in small towns that provided “home talent” for the cast in exchange for a cut of the overall profits.

The film’s a strangely ambitious hodgepodge of genres. Advertised as “the greatest airplane thriller ever filmed,” it also liberally borrows from detective thrillers, slapstick comedy, and romantic melodrama. The main character is Captain Billy Stokes (Laurence Criner), a decorated World War I fighter pilot who returns to his hometown of Mayport, Florida hoping to get his old job back as a railroad detective. He arrives to find the community in turmoil after the railroad paymaster and the payroll shipment in his possession go missing. Suspecting foul play, Stokes jumps on the case, finding strange clues like a bullet-sized canister capable of spraying sleeping gas. Eventually he narrows the suspects down to Finley Tucker (Harold Platts), a local pilot with a violently obsessive (and unrequited) love for Ruth (Kathryn Boyd), the stationmaster’s daughter. It climaxes with a daring plane chase through the skies with Stokes in hot pursuit of Tucker after he kidnaps Ruth. The sequence was cleverly shot on the ground using camera tricks that made the specially constructed Curtiss JN-4 biplane prop look airborne.

Though rudimentary by modern standards, the smart use of closeups and forced perspective are nonetheless effective, particularly an impressive shot where Finley’s plane does an inside loop that was achieved by physically flipping the camera upside down. (You can tell this was how they achieved the effect because the smoke coming from the plane’s engine and Boyd’s hair blow in the same direction even when the plane supposedly flips upside-down.) Also of note is Peg (Steve Reynolds), the one-legged Holmes to Stokes’ Sherlock, who gets the biggest laugh in the film when he loads his fake leg with a long-barreled pistol he supposedly stole from Jack Nicholson’s Joker which he uses while pursuing villains in a car while riding a bicycle.
Posted by Steve Kopian at June 09, 2020