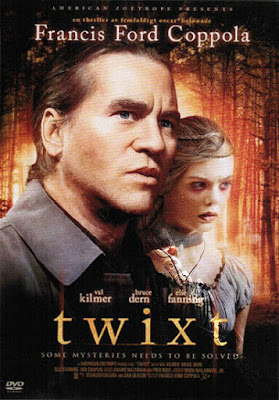 Shooting all the way back to his Roger Corman days Francis Ford Coppola's film is not something you'd expect from the maker of the Godfather-at least not at this point in his life. Based in part on a dream Coppola had the film concerns a drunken writer (Val Kilmer) on a book tour. Its going badly when he meets the sheriff (Bruce Dern) of a small town where people are mysteriously dying. The Sheriff thinks they should write a book together. Kilmer isn't sure. However the strange dream he has convinces him otherwise.  That's when things get weird...

Strange kind of road accident of a film is the sort of thing you can't take you eyes off of, simply because you want to know what is going to happen next and how it's all going to come out. Weird beyond words, this film has serial killers, Edgar Allen Poe (really), vampires, witches and Walt Whitman manuscripts.

Low brow and low budget the film moves and feels like a modern equivalent of some of the early Corman films of the 1960's. As WTF and bad as many low budget horror films are these days few can match the Corman, AIP films or their contemporaries for unbridled weirdness. Many were made fast and cheap with no thought of logic. People were going to be seeing them in drive ins were they'd be doing things other than watching a movie. TWIXT has that sort of feel to it. To me it should have been made by a 20 year old novice, not a 72 year old master

I've read that it was shot as a 3D film and I can believe it. Some of the dream effects would look great in 3D.  I have no idea if it ever played that way- though I would love to see it. I've also heard it was an experiment- which i'd believe since this feels off the cuff

I have no idea what to make of it.

Its kind of disposable but with Coppola in charge maybe not

A must for Coppola fans for all others I have no idea.
Posted by Steve Kopian at June 24, 2020