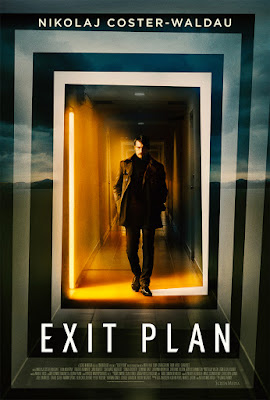 I am not certain what I think of EXIT PLAN. There are moments I love in its dark exploration of life and death and then there are times I'm not certain it lives up to it's potential. As a result I have been sitting on writing this review for over a couple of weeks because my thoughts about the film keep changing.

The plot of the film has Max, an insurance investigator  is dying because of a tumor. While looking for a missing an he stumbles upon the Aurora, a hotel where people can go to end their life and get the goodbye they always wanted.  Max makes arrangements to go, and finds his beliefs upended.

A dark moody film that forces you to think because of it's uncertain blending of reality and possible fantasy EXIT PLAN is a film that will challenge you. An in your face exploration of life and death the film forces you to consider what both of those things are as well as few others. It is a film where your emotions will get played and your feelings for the film will get bounced around. Good, bad or indifferent this is not a film that is going to wash over you but it will engage you as a full frontal cinematic assault.

And that is about all I can say about it. I say that not because I am being coy or lazy but because my thoughts on the film have been bouncing around for days. My initial thoughts were mixed, it simply put me in a black plac, the next morning I hated it. Later in the day I suddenly loved it only to be mixed when I sat down to write on it- and then I kept bouncing. I suppose I could sit on it some more but the US release would then come and go leaving you with nothing to read.

Personally if you can deal with dark themes and if you are willing to be challenged I highly recommend EXIT PLAN because it will forcibly ngage you. If you want shiny happy bunnies and a film to wash in one ear and out the other then look else where.
Posted by Steve Kopian at June 09, 2020