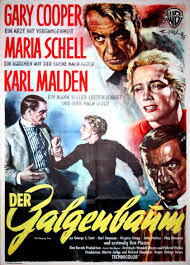 The settlers ride into the skeleton of the mining camp, cresting a hill overlooking the river valley infested with prospectors like ticks on a dog. At the top of the hill a single bony tree stands sentinel. “Every new mining camp’s got to have its hanging tree,” the driver cheerfully tells his companion as they ride by, “makes folks feel respectable.” It’s a brief moment, almost a throwaway aside. Yet this juxtaposition of the reality of mob violence with the fantasy of civility brilliantly encapsulates the worldview and philosophy of Delmer Daves’ The Hanging Tree. A viciously cynical Western, it interrogates the false front of respectability mankind drapes over its meanest impulses and finds them laughably pathetic.

The fifties had already seen Daves direct some of the darkest Westerns produced by the Hollywood studio system this side of Anthony Mann, beginning with the revisionist tragedy Broken Arrow (1950), the Shakespearean melodrama Jubal (1956), and the subtly anti-capitalist Cowboy (1958). But The Hanging Tree outdoes them all in terms of bare-teethed anger. The film follows Joseph Frail (Gary Cooper), a wandering doctor and gunslinger who sets up shop in Skull Camp, Montana. On his first day there he rescues a gold sluice thief named Rune (Ben Piazza) after he’s shot and almost lynched by mine guards. Frail forces the recalcitrant Rune to work as his manservant to pay off his medical debt under the threat of turning him in to the murderous authorities. Soon the two take in Elizabeth Mahler (Maria Schell), a Swiss immigrant hurt and blinded during a stagecoach robbery that killed her family while en route to Skull Camp. Elizabeth too falls under the influence of Frail, first falling in love with him, then being unwittingly bankrolled by him when she, Rune, and local prospector Frenchy (Karl Malden) stake their own gold claim.

The pattern here is obvious: though Frail might have legitimately good intentions—his selflessness in caring for impoverished locals who can’t pay him is proof enough of that—he’s incapable of maintaining relationships where he doesn’t have the upper hand. The other Skull Camp villagers are hardly any better, with the womenfolk being vicious gossipers and the men violent maniacs egged on by the clearly insane faith healer Dr. Grubb (George C. Scott). The microcosm Daves creates here would make Billy Wilder pause, and the final five minutes are a masterstroke of nihilism.
Posted by Steve Kopian at June 16, 2020