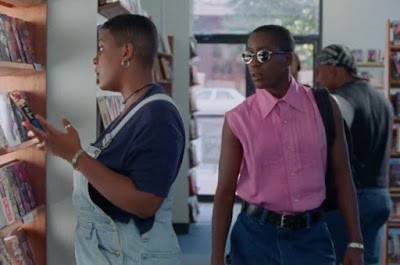 In an era when it was still difficult for women—let alone black women, let alone gay black women—to find work as directors, Cheryl Dunye carved out her own damn space in the 90s American indie scene, creating a highly idiosyncratic body of work unique within black, feminist, and LGBTQ+ cinema. Frequently setting her films in her adopted home of Philadelphia, Dunye’s work is a dizzying kaleidoscope of cinematic modes and audiovisual formats that’s completely unconcerned with the strictures of fiction and documentary filmmaking. Termed “dunyementaries,” these self-reflexive confessionals explore Dunye’s complicated feelings about her race, her gender, her sexuality, and her love-hate relationship with the lesbian community. Frequently she’ll interview herself and her actresses—and they’re almost exclusively lesbians; of the casts of the ten or so Dunye films I’ve seen I can only think of maybe two men—both in and out of character, commenting on the story they’re in and its real-life production. The result are films that shatter the boundaries between the act of creation and the finished creation itself, pulling the audience into the disorienting dialectic of artistic production.

Consider her 1996 movie The Watermelon Woman. Inspired by Dunye’s real-life research on black actresses in the early Hollywood studio system, the film follows a fictionalized Dunye’s attempt to discover information on “The Watermelon Woman,” an unnamed, uncredited black actress in an old film called Plantation Memories. During her search through archives, interviews, and the nooks and crannies of LGBTQ+ academia (including a visit to the…*ahem*…Center for Lesbian Information and Technology) she discovers that the Watermelon Woman was, in fact, a lesbian and quite possibly Dunye’s dream girl.

Of course, there was no actual Watermelon Woman and neither was there a film called Plantation Memories—both were creations of the real-life Dunye to deliberately expose and interrogate the paucity of black lesbians in film history. But the observations she makes on black film history and the interviews she secures with real-life queer artists and academics are very real, forcing us to ask where the fiction begins and ends. This might seem hopelessly dry, but The Watermelon Woman is both hilarious and sexy due to Dunye’s interweaving of her quasi-fictionalized explorations into film history with the hopeless romantic escapades of her cinematic counterpart. It’s groan-inducingly cliched to say, but there’s honestly no other film like it.
Posted by Steve Kopian at June 26, 2020