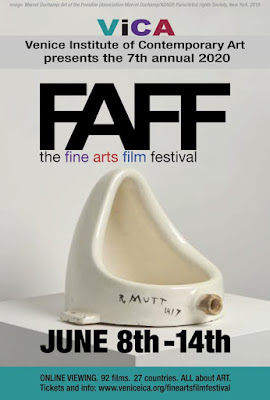 I was asked to cover the film THUMBS UP FOR MOTHER UNIVERSE: STORIES FROM THE LIFE OF LONNIE HOLLEY which was playing at the Fine Arts Film Festival in Venice California and because I has never heard of the festival I went to the festival website and poked around.  Finding that there was a large number of films I really wanted to see I debated contacting the festival dor access, when instead I noticed that it was only $20 for access to all 92 films. (you can buy packages of films for $10, individual ones for $2.99 or all of them for $20)

The Fine Art Film Festival kicks serious ass. If you love art in films and films about art you must go to the website and see as much as you can. As this posts I am struggling to try and see as much of the 92 films as I can before the festival ends on the 14th (Though Vimeo says I have until the 18th because I bought a week of access. The packages and single films give you 48 hours).

As I write this I am torn between taking the time to write up long reviews for the seven films I have seen past THUMBS UP... or getting a collection of capsule reviews out so you can clearly see how good this festival is. I'm going with the capsule reviews.

I recommend all of these films.


TIME TRANCE
Trippy animated film that goes way beyond melting clocks into the realm of truly hypnotic. This maybe only 4 minutes but packs a punch.

JOURNEY TO HOKUSAI
Portrait of  printmaker Tom Killion who feels a kinship with the great Japanese artist Hokusai. We watch Killion make his prints and travel to the home of his idol in a beautiful film that brings past and present together.

STOUT HEARTED
Portrait of George Stout who was one of the father's or art conservancy as well as one of the legendary Monument Men who helped the Allies rescue works of art from the Nazis. This is a great portrait of a great man as well as a nice primer about the preservation of art and other subject.

SALVADOR DALI THE EARLY DIARIES
With narration taken from Dali's diaries before he was the great one this film gives us a glorious look into the man before he became a legend. It also gives us a hell of good way into his art as well.

ACTUALLY ICONIC RICHARD ESTES
Magnificent look at an artist who influenced many and in the process changed the way we see the world. I've been a fan of Estes work for years. His photorealism amazes the hell out of me. What delighted me about this  film was not only the chance to get to know the man but the fact that it points out all these little details in his art so I now want to go back and see it all again

DECODING DA VINCI
A wonderful look at Da Vinci's art and life and how it was all part of a grand quest to find out. Watching this film I was even more amazed at Da Vinci and his work then I was before. And considering He frequently leaves me with my jaw hanging open that is saying a great deal.

For information on how to purchase the films go here
Posted by Steve Kopian at June 12, 2020