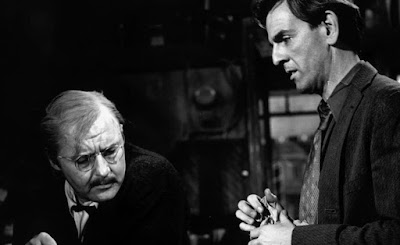 It boggles the mind that Sidney Lumet isn’t held up alongside Kubrick, Coppola, and Scorsese as one of America’s great canon directors to emerge in the wake of the collapse of the Hollywood studio system. Despite directing numerous films that routinely show up on shortlists of the best of their eras, he’s avoided the deification that’s blessed and cursed so many of his contemporaries. One wonders if this is due in part to his reputation as an actor’s director—indeed, many of his films seem more famous for their performances than as holistic works in and of themselves. We remember Henry Fonda’s quiet conviction in 12 Angry Men (1957), but not Lumet’s deceptively brilliant mise en scène; we remember Al Pacino screaming “Attica! Attica!” in Dog Day Afternoon (1975), but not Lumet’s calculated sense of place and pacing; we remember Peter Finch’s ravings in Network (1976), but not Lumet’s mastery of tone.

The Pawnbroker is another of his films that threatens to lose itself in the shadow of its central performance, in this case Rod Steiger’s portrayal of Sol Nazerman, a Jewish Holocaust survivor operating a Harlem pawnshop. In stark contradiction to his usual overacting, Steiger’s Nazerman is a masterclass in repressed emotion. He acts and emotes like a block of granite; he feels neither animosity nor sympathy for his customers—desperate tenants, jonesing junkies, doe-eyed single mothers—as he undercharges them for priceless family heirlooms and obviously stolen goods. He navigates the world in a daze as memories of his old life and murdered family flicker before his eyes like lightning bolts.

But the film is more than just Steiger’s performance, it’s a savage exploration of the lingering effects of trauma (and a historically significant one, too, as it was the first American film to explore the Holocaust from a survivor’s perspective). Consider a notorious sequence where a prostitute strips naked in a feeble attempt to sell herself to Nazerman. As his eyes linger over her breasts, he flashes back to images of his own dead wife’s bare breasts as she was raped in a concentration camp. It’s a horrifying use of montage that de-eroticizes the female body so effectively that the Production Code granted the film their first ever exception on their moratorium on bare breasts. The Pawnbroker is the rare film that’s Important with a capital “I” as well as Great with a capital “G.”
Posted by Steve Kopian at June 22, 2020