Monster Maniacs or What is Steve Reading Part 2 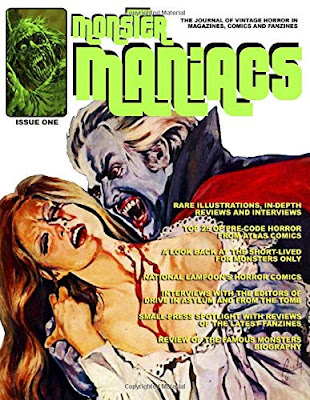 Monster Maniacs is a new fanzine that primarily focuses on horror in comics. If you are wondering why I am going to talk about something comic related it is because the discussion bleeds into the realm of film since Justin Marriot and his writers talk about the monsters of cinema.

Only two issues of the magazine have been produced but they are choice. Full color beauties the magazine reprints panels, and pages from various horror comics as it seeks to illustrate some killer interviews from artists, scholars and fans who talk about their love of form.

The first issue starts taking about other magazines such as MONSTER! as a magazine we should be reading, the issue then settles down to focus on art and comics with a discussion of National Lampoons dips into horror, Atlas' pre-code horror, Cracked magazine's short live For Monster's Only. Issue Two talks about Charlton Comics, Vampirella, Web of Horror, poster magazine and more.  Both issues are full of stunning art from people like Bernie Wrightson

While the interviews are great the art is even better. I love getting a chance to really look at all of the great art that was turned out in the hope of scaring people to death. I particularly love the articles on Atlas and Charlton's best horror stories since it made me go -"Oh yea I remember that". I also liked to look at the chosen panel and wonder what in the hell that meant for the whole story they were describing. (I never had many Charlton or Atlas comics, most newsstands growing up only had them sporadically, but when they did I snapped them up.)

I love these issues to death. My only real complaint is that as good as the issues are I know I am just a half step out side of being the perfect audience. While I understood a lot of the discussions in the interviews there is a point when discussing some of the older comics where I felt overwhelmed. I am not versed enough to completely know who some people were. But that is okay because being overwhelmed and sticking with it in a situation like this is how you learn.

Monster Maniacs can be had at Amazon 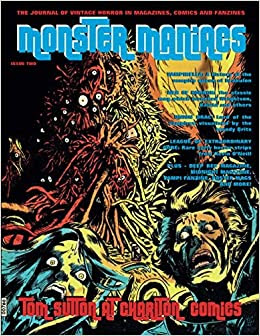