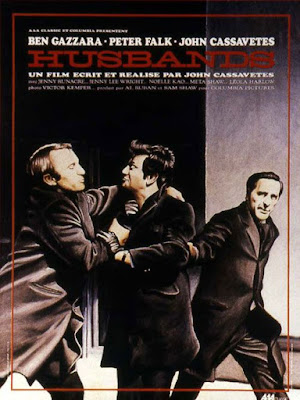 On September 18, 1970, talk show host Dick Cavett filmed one of his most infamous episodes. The guests for the night were John Cassavetes, Peter Falk, and Ben Gazzara who were there to promote Cassavetes’ new film Husbands. But instead of giving the usual promotional song-and-dance, they flopped around the studio in a stupor, smoking and ignoring Cavett’s questions. At one point when Falk finally stood up to tell the audience what the movie was about, Cassavetes ran up behind him, stuck his head between his legs, and lifted Falk on his shoulders, bumping him up and down like a toddler. Eventually Cavett asked them point blank “are you guys all smashed?” The answer, of course, was that they were, and for an agonizing thirty-five minutes they made asses of themselves on national television. One wonders what in the hell had made them humiliate themselves so badly that, according to Cavett, they had trouble looking him straight in the face for years afterwards.

Having seen Husbands, one is inclined to believe that maybe the three had gotten soused to help ease the strain of promoting a movie they knew was a train wreck. Indeed, there is scarcely a better way to describe it. The story of Gus, Harry, and Archie (Cassavetes, Gazzara, Falk), three suburban New York buddies reeling in the wake of a fourth friend’s sudden death, it attempts to be a freeform exploration of grief and stunted machismo as they drink themselves through an unexpected midlife crisis.

Largely inspired by Cassavetes’ own feelings of grief after the untimely death of his older brother, the film is a meandering, directionless blob with hardly any idea of what it wants to say or accomplish. There are moments when Cassavetes seems like he’s making a point about toxic masculinity, particularly in the depiction of Harry as an abusive husband and a scene where the three humiliate a bar girl in a singing contest after the funeral. But these all accumulate into a collective “so what?”

The last hour which takes place during a spur-of-the-moment trip to London where the three all pick up women at a casino sees glimpses of Cassavetes’ traditional confidence, particularly a surprisingly moving scene between Falk and his non-English speaking Chinese call girl. But the film is too overlong, too dreary, too unfocused for anything to have any real impact.
Posted by Steve Kopian at June 10, 2020