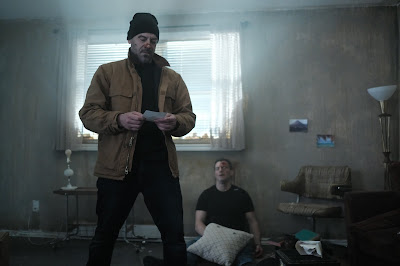 Lance is an ex-con who is offered an olive branch by the mobsters who sent him to prison. If he will kill some people then he will be left alone. He does the deal but there are complications, a witness,  which leave him with no choice but to take steps to protect his neighbor.

Good low key thriller has explosions of action and violence.  Because the film takes a bit of time to get going and uses it to build the characters we care about the people on screen more than if they simply just threw us into events.  The characters are more than just cookie cutter targets with the result we really feel for Lance's plight and the ending has much more of a bite than it would otherwise.

I do have to say that because of the whole Covid 19 crisis I have been been watching a large number of smaller action films than normal just to fill slots. A good number of them have been groaners, however every now and again  I have been hitting films such as TAINTED which may not be the greatest thing since sliced bread but which entertain way beyond expectations.

TAINTED is a small gem and highly recommended.
Posted by Steve Kopian at June 12, 2020