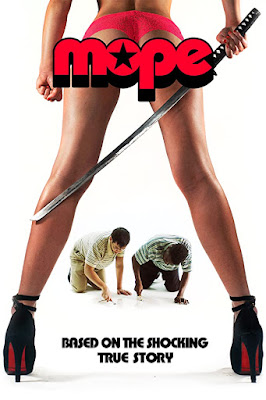 Billed as a comedy, it really isn't. The humor comes at the characters expense as their lives basically remain in the toilet despite their dreaming and attempts to get out. Things go from a musing at the start to uncomfortable straight into black. These guys are sad characters and Hill is the saddest of them all because he can't see where he is clearly enough to climb out and move on.

That the film is so heartbreaking is because Nathan Stewart-Jarrett is so good. While the rest of the cast is fine, Stewart-Jarret sells it and makes us feel is sadness and his rage. The look in his eyes when he finally snaps is both frightening and crushing. There is no way you will feel good after witnessing it (that's a rave).

If the film has anything really wrong with it outside of the forgivable low budget constraints, it is the questionable use of video of  the death of Hill. I don't think we really need to see a man fall to his death since it doesn't really add anything. Indeed I was kind of pulled out of the moment by the shift in image quality enough that I actually went on line to see if the end was actual footage and it appears to be. A true story doesn't mean we need to see the true ending.

To be honest I had not planned on seeing the film. I intentionally blew off the requests to review it, however I was sent the film anyway in a small window I gave it a shot and found I liked it. Granted its dark subject matter and downbeat nature makes it something I will not watch again (that's my own dislike of downbeat). If the subject matter intrigues you it is worth a look.