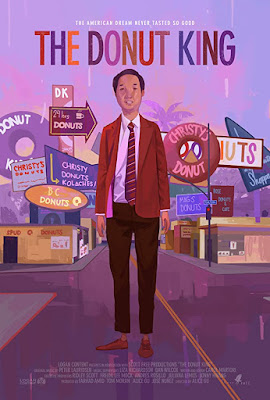 Portrait of Ted Ngoy, the donut king of Los Angeles. Ngoy came from Cambodia in the 1970's and fell in love with donuts. He then opened a shop and promptly began to change LA forever. He brought over hundred of his fellow Cambodians who trained with him and then opened their own shops making it so 90% of the shops in the city are owned by Cambodians and Dunkin Donuts had to give up trying to break into the market.

Solid look at one man who represents the immigrant work ethic in America. If you want to see how most immigrants bust their asses when they come to the US just watch the people in this film as they strive to make the American Dream their own. In an age when so many people who hold a failed bankrupt business man as a hero it is nice to see a man who actually can earn a living.

Ultimately what hooks us is Ngoy himself. A gregarious soul with one hell of a tale, we end up watching not only because we like him, but more importantly we can't believe how his story goes. Its a hell of a story that has a lot of things to ponder.