The New York Film Festival is running two films by Heinz Emigholz. If you ever wanted to know what a filmmaker's voice is like these are films to see because everyone, in both films, all sound like the same person. While both films have interesting ideas the presentation may leave some people cold, especially if they want films with action rather than ideas. 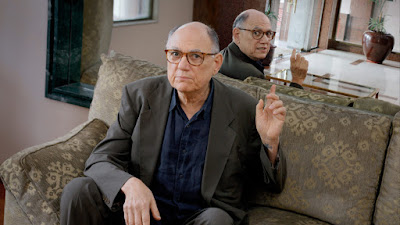 An older white guy speaks of life, death and assorted other subjects.

This intriguing meta monologue is a mind trip and frequently funny. This is a film that is full of truth and bullshit. Because the film is fully away that it is both things it makes it much less pretentious than it probably should be. This is the sort of thing that if it were transferred to the stage wold probably run for years Off Broadway in a small house

I was fascinated and amused. I don't need to see it again but I would definitely want to read it. 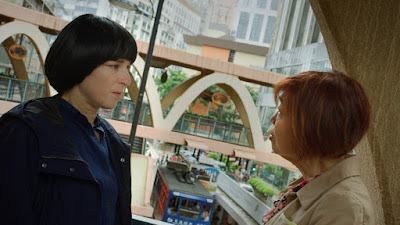 Series of intellectual conversations set in various cities across the globe that are really supposed to be the last city of the title. The subjects concern a variety of subjects including many religion, sex, family, taboos and aliens.

Mannered and deliberate discussions are intriguing, for the most part, more for hat is being said rather than the delivery which comes across as if it one person cloned having a discussion with themselves. None of the characters really have their own existence and are purely a means of having the ideas come out as a discussion instead of a monolog.

I was fascinated by the ideas even as I was less than thrilled with the mannered presentation. I know there has to be a better way of doing it this rather than having the stilted delivery we have here. I know that is part of the point. bt at the same time it made this 100 minute film a tough go and I found I had to watch it in pieces rather than all at once.