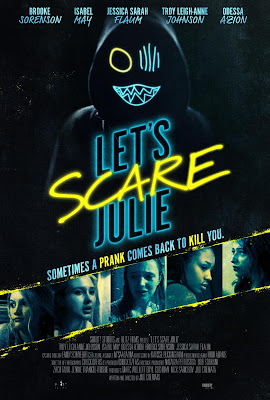 A group of teen girls hanging out at home decide to scare the girl across the street. Though no one has ever met her they decide to do it anyway since the hose is haunted, But things go horribly wrong and the girls begin to disappear.

I was not planning on reviewing LET'S SCARE JULIE but I was sent a copy of the film right as I was between festivals so I decided to give it a shot to fill an evening. The result is a film that vexes me.

The plot is fine and the cast is good...the problem is the film was made with the selling point of the whole story being filmed in a single "85 minute take" (it's really more like 78 minutes).The problem is that this is a story that needs more than a single take to be told properly. Because we are anchored to just one camera we are limited to what we see. More than once I wished the camera would cut away to something else or another angle. Instead we stalled as things happened off screen or we delayed as we traveled from place to place. While it is realistic it kills the momentum of the story because things were not structured to keep things moving. More than a couple of  times (the ending for example) moments seem slightly cheesy because being tied to the single camera they were limited in how they cold shoot something. A ghostly figure for example which should have been fleetingly seen is there much too long and we can see the make up. All fear disappears.

Give the film bonus points for trying but take a bunch back for not pulling it off.
Posted by Steve Kopian at October 01, 2020