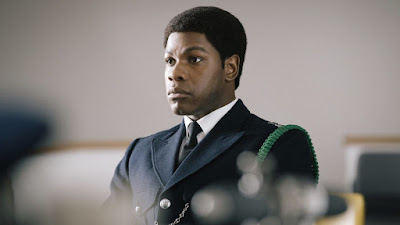 Final film in Steve McQueen's Small Axe Anthology stars John Boyega as Leroy Logan, a young forensic scientist, who joined the Metropolitan Police Force against his father's wishes(his father was badly beaten by the police). He wanted to fight the racism and bigotry from within but found a hornet's nest. The real life counterpart would eventually rise through the ranks to become a Superintendent and change the force, however this film doesn't go that far.

Only because it is being compared to an embarrassment of riches, I found RED, WHITE AND BLUE weakest of the three Small Axe films playing at the New York Film Festival. A good film whose focus is on the fathers and sons, the desire for change and the inability to bring it and the institutional racism in the police, the film is carried along by a great performance by John Boyega, especially in the later scenes when his optimism and hope has drained away. Watching Boyega hold the film together it is clear how wasted he was in the Star Wars films. Simply put he needs to be front and center.

My problem with the film is simply that the film is too short by half for all that it is trying to do. Running a breezy 80 minutes there is enough going on here that it could run twice that without anyone batting an eye. What is here is very good but at the same time I wanted to see  some of the threads more fully explored.

I know that my reaction to the film is entirely influenced by my seeing and falling completely head over heels for LOVERS ROCK and MANGROVE. I'm certain that not having those films to compare it to I would have been more entusiastic for it.

As it stands now RED,WHITE AND BLUE is a good film in a great series.