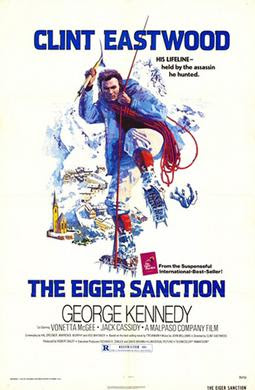 Dated but intriguing Clint Eastwood film has Eastwood playing a Dr Hemlock, an ex-assassin for a shadowy government agency who is lured back to kill the men responsible for a the death of an agent. One of the targets is known, the other is not and Eastwood has to join a party to set to climb the Eiger mountain, suss out who the target is and kill him.

With mountain climbing having changed radically in the last 45 years the gear and style of climbing is now incredibly dated- assuming it was ever close to how climbers of the period actually climbed. For a several day long climb the men carry no tents and seeming no food or utensils for anything other than climbing. Its laughable if you think about it. However the climbing sequences still generate some suspense.

What makes the film cringe producing is the film's treatment of pretty much every one other than Eastwood with jokes directed at an albino, gays, people of color and involving rape. I know the film always pissed off people since it was made for most of the reasons listed but in all honesty its now really close to being the sort of film you really can't play any more. (The source novel was a James Bond satire but the film's attempt to match the the Bond film's comedic tone is just wrong)

Its kind of a shame since on it's own terms THE EIGER SANCTION is a passable time passer. The question of who the target is holds our attention as do the climbing sequences and Eastwood's constant quips. Even when things weren't offensive as they are today the film was never the best Eastwood film but at the same time it does entertain.

Worth a look with the understanding that there is non-politically correct and possibly offensive material here.