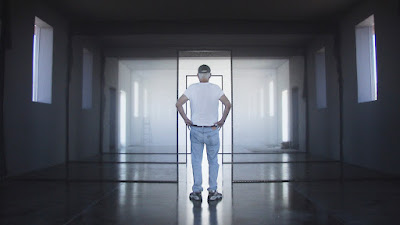 Portrait of the artist and his work is going to thrill some and be a head scratcher for others since Irwin's pieces are ephemeral and installations and often don't look like things we would consider art in a conventional sense since they are about light and space.

A beautiful looking film it didn't really work for me. While I like and understand what Irwin is doing with many of his pieces, this films over the top reverence for the man and his pieces comes off as over the top. You kind of know you're in awkward territory when one of the first talking heads talks about how important Irwin is to the history of art while at the same time explaining most people have never seen his work because of the nature of what it is- being fleeting installations or projects that disappear over time. Having seen the film I still don't understand why he's so important despite really liking many of the works.

Forgive me this film needed someone to talk on a regular Joe level rather than guys in suits talking over everyone's head.