KING OF THE VIKINGS 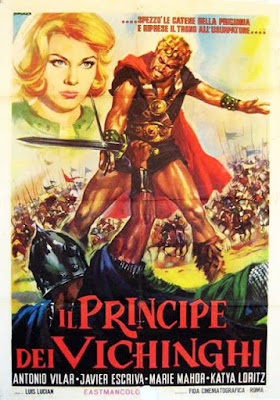 King of Denmark locks his half viking son away because of a prophecy that he will kill the king. When the presumptive heir plots to get the prince out of his way chaos reigns.

More soapy than action packed film is still a good way to pass an evening as the differences to other similar tales  help keep interest. We have been here but at the same time the shading of the characters keeps this from ever being run of the mill. Yea we know how it will end but we don't know the road it will take to get there.

Additionally the talk of the vikings as an oppressed people  needing to rise up has resonances in today's world where minorities are stepping up to take a place at the table.