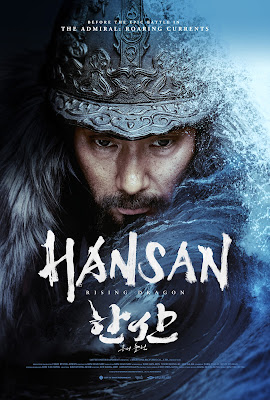 Hitting home video Tuesday is HANSAN RISING DRAGON is the first of two prequels to THE ADMIRAL: RAGING CURRENTS which was the highest grossing film in South Korea when it was released in 2014. The film was the  story of the aging Admiral Yi  who was shuttle off to pasture just as the Japanese came calling.  It wasn't until they were on the verge of collapse that Yi was recalled and he saved the nation one last time. It big and bold and mind blowing. The sea battles are things that have stayed with me ever since I saw them the first time.

Eight years on filmmakers return to the story of Yi and because the first film is literally his last battle, travel back to when Yi was young and beginning to do impossible things.

I'm going to not try to explain all of the details of the plot. Not because I don't know it more that I know that if I try to explain it someone is going to say I got something wrong. Additionally misspell the names of the characters and places. I have some of them in my notes, but at a certain point I stopped writing and was too caught up to bother with notes. (Notes are you kidding me giant ships are crashing into each other making me leap out of my seat while yelling how cool it all is, I don't have time to take notes)

The battle sequences rock. I mean to hell with Errol Flynn sea battle or Star Wars space battles, give me turtle ships beating the crap out of each other. Talk about visceral delights, I was talking out loud to no one about how freaking cool it all is. Yes I know this wasn't how it really was, but who the hell cares when it's this awesome.

The battles are the reason I am going to see the film again and again.

I should say that the drama sequences are also really good and I suspect that when the next film comes out we'll have a great portrait of General Yi.

I truly love this film and had a blast watching the battles.

Recommended, even more so if you are seeing this on a truly big screen.