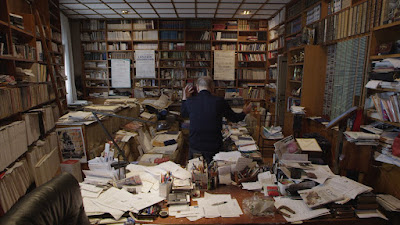 I take flack some times because I speak my mind when it comes to films. The trouble comes when I speak not from my head but my heart. I will say things that some people think is over the top or for effect, but I don't do that, I say what I feel.  And when it comes to Giuseppe Tornatore's ENNIO I can only speak from my heart.

Simply put, the experience of seeing ENNIO is a theater with big sound and big images was like seeing God. Getting to see the long career of Ennio Morricone play across my eyes and ears was a religious experience. Seeing the whole life of one of the greatest composers in the universe left me in absolute awe.

Turning the camera on Morricone he managed to get the man to open up and talk about what he did as well as why and how. Watching him explain how one piece of music lead to another was like watching the doors to the secrets of the universe open. I've never seen any composer/artist explain how his masterpieces all came about like this. This is like looking into the mind of God as created the world.  It's all counterpointed with the words of his contemporaries and fans who lay out how Morricone changed music, nay, the world, as we know it.

And make no mistake by the end of the film you will understand that Morricone really changed the world because his music changed how everyone hears the world.

If you want to know why this film hit me so hard you have to understand that one of my most favorite moments in all of the movies is in Tornatore's CINEMA PARADISO, or rather the end of the film. The final sequence as we see all the cut pieces of film and watch  Salvatore see his life before him is one of the most bittersweet and glorious moments ever put on film. Its a moment in which every movie lover, I mean hardcore movie lover, loses their minds and sobs in recognition because that's our lives up there being played back to us. It is like we too are seeing every film we ever saw and loved.

Now the music for CINEMA PARADISO was written my Ennio Morricone.  And for myself and a lot of people  Morricone's music was a large part of the soundtrack of our lives. Morricone began writing movie music three years before I was born so I was alive as all his iconic music was coming into the world. He literally was shaping my life as I grew up.  As a result watching ENNIO is a 153 minute extension of the end of CINEMA PARADISO, but its not one piece of music but dozens. Watching ENNIO was for me, and I suspect for others in the audience being Salvatore as our whole lives played out before us.

It was and is pure cinema magic.

It is a masterpiece.

(One note: If you are seeing this at home and have a good stereo set up- crank the volume. If you are watching this on a laptop or computer  wear headphones)

ADDENDUM: Someone please release this film in the US and Canada.

Okay, forgive me, I need to get on my soap box:

If you want to see this film and live in the United States do go see it tonight (November 13) at DOC NYC or on their platform through November 27th because I don't know when or if the film will show up in the US again.

I have been told that some studios  were interested in the film but either felt the film was too long  or too much in Italian.  Considering the film is about a man who wrote 500 plus film scores in 60 years  the length is understandable. As for the film being too much in Italian the film is about an Italian composer who is speaking in his native language. On other hand the film has people like Bruce Springsteen, John Williams, Quincy Jones, James Hetfield and others talking about the influence of Morricone's music so I don't know what else you'd need.

Honestly this is the sort of film that someone like Kino, Cohen Media, or  Janus (Criterion) should be releasing because it reflects on the films that they are releasing on home video. In all seriousness how many of their films have Morricone scores? Enough that they could tie a release to them.

Other distributors like Oscilloscope, Kim Stim or some of the others should consider releasing the film because it is such a damn fine film.  Yes it seems to be niche but Morricone's films transcend that and are part of our collective world consciousness.

Ideally what needs to happen is that some one like the Quad or the Film Forum in New York or some of the other well known repertory theaters, even The Alamo Draft House, has to do a retrospective of Morricone's films  and play ENNIO as part of that. ENNIO will tie all the films shown together.

Please someone make the deal and make this film available to everyone. This is not just a film about one Italian composer, this is a film that is about something greater. This is a film about the course of our lives and why we see the world as we do. It may not seem like that at first but by the end of ENNIO when you see a soccer stadium full of music fans singing along to Morricone's music you will realize that ENNIO is not about just music but things that our now part of our very beings.

Someone please step up and release ENNIO.