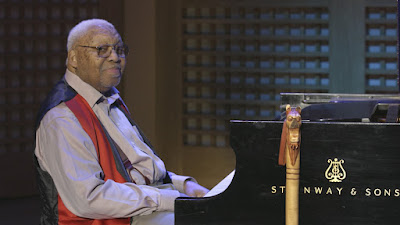 Loving portrait of Ellis Marsalis in his own words as well of those of his friends and family.

This good  portrait of of one of the most influential musicians of the last century. Yes he fathered Wynton, Branford, Delfeayo, Ellis III,  and Jason but he taught so many others, as well as influencing all those he played with. His finger prints are all over Jazz as we know it.  The film is also full of wonderful music.

The problem with the film is not only is it incredibly low key, like the man, but it also leisurely paced. The story unfolds slowly. That would be fine except that stories are broken up. For example Ellis will tell part of the story of his growing up and then we will have a musical number and then the story will pick up. There really isn't a reason to break the tale up. There is also possibly too much music.  Some where about the half way point I had the feeling that the film was using the music to stretch the run time. It's not bad, but it doesn't feel organic.

Honestly I was disappointed. This was one of my must sees of DOC NYC going in, however my feeling coming out was the desire to recut the film