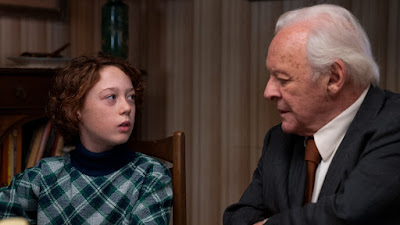 When I first saw Armageddon Time at the New York  Film festival I walked about 40 minutes in. I couldn’t take the film’s cartoonish presentation of a family. It didn’t feel real. Instead of reviewing it I ran Liz Whittemore’s piece from Reel News Daily. I figured I’d try it again when it was released to theaters. I was going to take another bite because several people I know really liked it, and because one friend said the film’s events ran close to what happened to him.

Having seen it a second time I still don’t like it. Its still a cartoon. Yes I now see how the film mirror’s real life but the film still is  badly acted cartoon.

Set in 1980 in Queens New York the film follows a well to do white family as changes come calling on them rocking their world.

This is the sort of bad film where you want to get up and scream at the screen in an attempt to make the actors and filmmakers do better. Watching it you are uncomfortable because the film is so disconnected from reality, despite looking kind of like reality. I understand this film was based on actual events but the presentation is so cartoonish  that none of it plays real. You look at the family structure and you see a family and then they open their mouths and the words and accents coming out of the mouths are something from bad TV sitcom rejiggered into a social drama.

I was pained watching the film because I had a sense that everyone on screen was giving the worst performance of their careers and I was mortified for them. Everyone was off, with the kids coming off as truly obnoxious and not sympathetic.

I don't know if it's the script or the direction or the editing, but what ever the reason this movie stinks it's all James Gray's fault. If nothing else with him at the helm this should have been better. There should have been real characters not cut outs. The kids should have been kids and not like someone who was never a kid's idea of what it is like to be a kid.  Worse everything  feels like cut outs are being moved around and not people living their lives.

Watching this film twice was one of the worst cinematic experiences of my life- and considering the crap I've seen that is saying something. Indeed I sat through films so bad the management of the theaters actually gave me free passes because I was the only one to make it the ending of the film without walking out.

I think the best way to sum up this film is quoting the words of the my friend who saw his life on screen, he said that he saw painful chapters of his life played out before him but that he felt nothing because things had been handled so badly there was no emotion  and no connection to life as lived anywhere in the film.

Email ThisBlogThis!Share to TwitterShare to FacebookShare to Pinterest
Labels: drama, not worth the effort, NYFF 2022