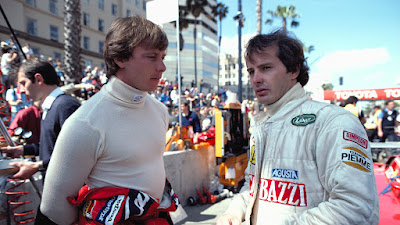 Recounting of the tragic tale of the friendship between Formula One drivers Gilles Villeneuve and Didier Pironi that ended tragically in 1982.
The short version of the story is that Villeneuve and Pironi were drivers for the Ferrari F1 team. When Pironi broke a gentleman's agreement  about how the race in San Marino was to play out and refused to follow the team instructions,  Villeneuve was furious. He vowed never to speak to his teammate ever again. Two weeks later in an effort to beat Pironi's qualifying time for the next race Villeneuve was killed in a car crash.  It's a story of hubris that rocked the racing world and ended up changing the sport.
This is a good recounting of a a legendary racing story that has has been clouded by time and retellings. It's nice to see the story brought down to earth for us mere mortals to enjoy. I love that that the film has took the time to talk to not just the racers involved but the families of the men involved. Bonus points for not pushing Villeneuve's son front and center (he's F1 Champion Jacques Villeneuve).
As much as I like the the film I'm not sure how this is going to play out for the masses. I'm a big F1 fan from back in the day so I remember when this all happened and why it was a big to do in the context of the time.  The trouble is looking back the story is a little less vital. Yes this is the story of two men locked in a battle to be the best but there is no "lesson" there is no larger picture other than the tragedy. It's almost as if all the film and the event can muster if this is a cautious tale about narrow minded and self centered drivers who lost it all because they couldn't see beyond themselves. It's an interesting story but I was left wondering why we needed a feature film on this subject, or more to the point why it had to be so focused on the tragedy when there was more to both men's lives than that.
Still the film is a solid revisit of F1 in the bad old dangerous days and is recommended for those who like racing or sports docs.
Posted by Steve Kopian at November 13, 2022