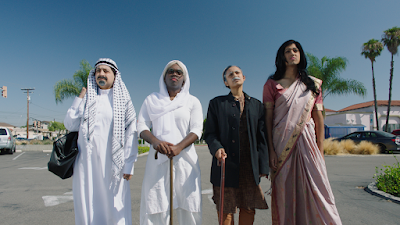 Sam Kronish of Reel News Daily checks in with this review of a funny comedy.

The first hour of Ravi Kapoor’s Four Samosas is a cheerful, gorgeous delight. The film follows 4 wayward teens across a few days in Artesia, California. Vinny (Venk Potula), an unmotivated amateur rapper going nowhere fast, is the de-facto leader and protagonist. When his ex-girlfriend, Rina,  becomes engaged to his greatest rival (a game, but over the top Karan Soni), Vinny decides to spring into action. Unfortunately, his brilliant plan is to steal Rina’s wedding diamonds from her father’s grocery store, reasoning that the loss of dowry would dissolve the engagement (great plan, no notes!) To execute the heist, Vinny enlists his Bollywood-hopeful best friend, Zak (Nirvan Patnaik). Local reporter Anjali (Sharmita Bhattacharya) and snack-crazed safe cracker Paru (Sonal Shah), round out the squad.

Intentionally or not, there is quite a bit of inspiration from Wes Anderson on display here. Certainly in the absurdity of the plot. Think Rushmore meets Ocean’s Eleven vibes. This inspiration is even more present in the strength of the cinematography: color, camerawork, and framing are central to driving the film’s plot. This strength means that relatively few filming locations (a shop, a garage, a street on Pioneer Boulevard, a grassy park) can be leveraged into a true sense of place. These visuals bring Artesia, California, and the lives of the few residents who make up this story, to lush life. This is a film that nails so many of the little details.

The heist scenes particularly benefit from this and are worth the price of admission. Rather than take the Michael Bay approach, Four Samosas relies on characters’ expressions (vs explosions) to convey suspense and comedy. Kudos to the costume designer for some of the biggest laughs.

The script is where the Four Samosas comes up a little short. Every interaction feels like a mix of absurdity and broad exposition. In the early going, this balance holds up (the approach is particularly effective during the heist planning scenes.) After the first hour of the film, the rinse-and-repeat nature of these interactions begins to show through. The scenes between the heist and the film’s conclusion totally lack urgency. This is the rare 80-minute feature that drags.

Kapoor nevertheless manages to land the plane effectively with a sincere conclusion. Overall, Four Samosas is a charming ride. This is a warm, love letter to a community that will leave you smiling.

For more from Sam and Reel News Daily go here.