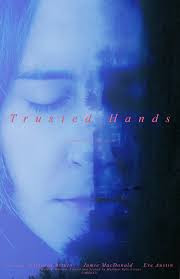 A woman spends time alone listening to a relaxation tape.

This is brilliant filmmaking. Everything in this film is just masterful. Levine is operating at the highest cinematic levels. The look and feel of the film is similar to the best work of Lorcan Finnegan whose films FOXES, VIVARIUM and WITHOUT NAME are disturbing before anything spooky happens.

This is how you make a horror film.

I’ve seen other films from Levine and I’ve enjoyed them, but frankly TRUSTED HANDS pushes things into a new level. Give this man a seat at the feature film table.