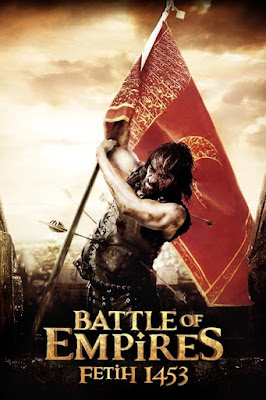 Battle of Empires is a slightly shortened (by half an hour) version of Fetih 1453 an epic about the Ottoman empire taking Constantinople. The film follows Mehmet II as he ascends to the Ottoman throne. Forced to navigate enemies in and out of the kingdom he lays siege and takes Constantinople. The film is a huge epic spectacle about the mechanizations in the Ottoman court punctuated by eye popping set pieces. While it is full of computer generated imagery, there is a point where you stop noticing it and just going with it because what we are being shown is so mind boggling that you realize that there would have been no way to get anything close to that shot without computer assist (people would have died)

To be honest I need to go back and really watch the film. It’s not that I didn’t watch the film, more that I put the film on as a background to something I was doing in the same room. Somewhere about twenty minutes in it became a battle as to what I was going to do, watch the film or handle the task at hand. After another 20 minutes I stopped whatever I was doing and just watched the film. I know I need to go back because I missed stuff, and I should have done it when I was watching but I was so hooked by the film I just wanted to see where it went.

This is the sort of film almost no one does any more and it is a delight to see something big and epic like this once more.