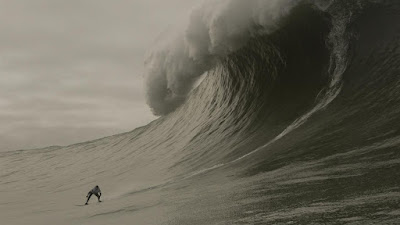 Opening  night film of DOC NYC of 2022 Maya Gabeira, the world's best big wave surfer- period. She is better than any man or woman doing the same thing. The film follows over several years as she competes, deals with injuries, and chauvinism.
If you like surfing docs this is something you will want to see on a big screen. The images of Maya surfing and the waves are among the best I've ever seen. I don't say that lightly. rather as a huge fan of great surf footage. I've been a fan of great surfing docs since I started Unseen Films when some of the first films I covered were surf films.  Trust me the images in this film will blow your mind. Puny humans should not be dealing with monsters that big (Godzilla has nothing on these waves)
Beyond the images this is a good if by the numbers portrait of a surfer.  If you like surfing docs you've seen the basic format before since the film follows the usual patterns. There is nothing wrong with that, it's just that the narrative doesn't quite match the awesomeness of the images.... which is the real reason to see this.
Recommended for the jaw dropping images.
Posted by Steve Kopian at November 10, 2022