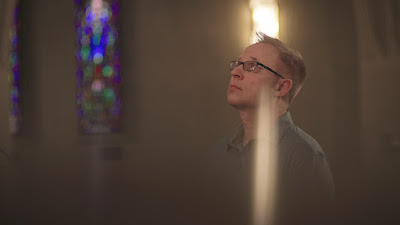 1946 is one of the most important films of the decade. That’s not hyperbole, it’s a statement of fact. An examination of how the mistranslation of a phrase in 1946 set in everyone’s mind that homosexuality was a bad thing.

Framed by director Sharon "Rocky" Roggio‘s relationship with her dad, an evangelical minister,  the film begins as a question of whether a gay person can be a christian.  The film follows as Roggio discovers Kathy Baldock who was doing research on when the word homosexual entered the bible. Baldock was on a crusade to find out why her best friend wasn’t loved by god. What she found out was that the negative attitude toward being gay comes from the fact that the translators didn’t truly understand what several words meant so they fudged it.  The film shows how it happened and why and it puts the whole discussion in the context of two thousand years of translations and culture. If you have an open mind the film will rock your world.

As the film clearly points out, the mistranslation, and the inability to instantly correct the mistake (that’s a story) has resulted in decades of death and destruction as people took the mistake to mean they could destroy the mistakenly label abominations. I was crushed by the realization.

I was also shocked at how Roggio doesn’t sugar coat her father’s refusal to look at the evidence that the translation is wrong. In his refusal to see the world as it is we see the vast majority of those who will not change their mind even when confronted with irrefutable evidence. (Hell, the film points out that there are forces dead set against the facts because it will change their world view)

But lest you think this is all negative, the truth is there are the moments of great joy and soul saving hope.  When we are introduced to the man who first spotted the mistake I began to cry.  The simple statement “Hi David” had me reaching for a tissue. I also sobbed at the conclusion of the film which was filed with so much hope and love – the film is ultimately a discussion of forgiveness and the ability to bridge view points. And it will leave you feeling good.

This film is magnificent and an absolute must see.