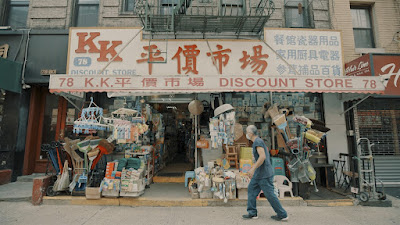 A look at the changing nature of big city Chinatowns via looks at the areas in New York, Montreal and Vancouver.

I used to haunt New York's Chinatown. I was there every weekend for decades looking for movies and goodies in the various shops  across the lower East Side of the city. I was well known enough that many of the sellers would say hello to me if they saw me away from their stores. Over the decades I watched how businesses came and went and how old buildings with charm were demolished to be replaced with cold impersonal towers. As Chinatown crushed Little Italy to a a few block area, the gentrification of Chinatown was slowly crushing the area that lives big in my heart.

BIG FIGHT... is a look at the areas known at Chinatown, the people who live there and those who are fighting those that want to change things up. Its a wonderful portrait of a group of people who understand that you really shouldn't destroy the past for something new. Its a film that is nicely open eyed about what is happening while being wonderfully hopeful about the people who want to save their history.

I really loved this film. I love how it shows how the battle to save Chinatown changed with Covid. Having been in Chinatown during the pandemic (I had to go for a funeral)  I saw how the lack of tourists and customers crippled many businesses. The lack of customers made the building and stores a target for real estate moguls. I loved that despite the economic down turn people are not giving up.

This is a super film  that should be seen as a warning on a larger level- rich people and city governments want to change the charm of their city in order to make a buck.