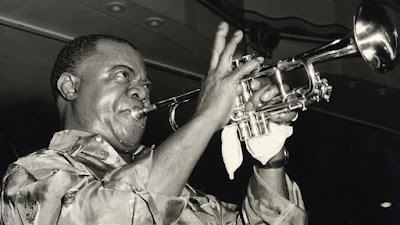 Apple’s Louis Armstrong’s Black and Blues is a super look at the musician. Made up of tons of archival material, especially his own vast collection of reel to reel recordings, it’s probably the first film biography that presents Armstrong as being a much more complex person than we’ve seen before.

The reel to reel recordings I mentioned were daily recordings that Armstrong made of his life and thoughts. By all accounts he recorded a good chunk of his life, and the result is a record unlike any other about any person who ever lived. It seems it’s all there on tape if any one wants to listen.

Supplementing the recordings are the voices of friends and family. They fill in details that we couldn’t get through Armstrong’s recordings. For example thanks to Wynton Marsalis we get a sense of the how some blacks had a mixed feeling toward Armstrong. Some thought he was being an Uncle Tom,  but that wasn’t the case. Armstrong wasn’t trying to be anyone except himself. He intentionally didn’t speak out on hot button subjects publicly because he knew his words carried weight. However privately he spoke his mind.  Because of the recordings and the words of the people knew him we got to look behind the veil.

I liked this film a great deal. I liked that it threw open wide the life of a many I always liked. I liked that it isn’t an typical in it’s presentation. I love that we go into unexpected places, even to the point when we see some his most famous songs in versions we may not have seen before.