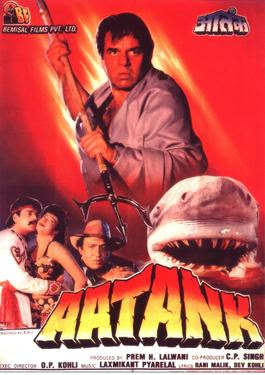 AATANK is a legendary Bollywood film that recently played Fantastic Fest in a restored version. While I’m all for restoring films, this is one I’m not sure this was a wise one that to spend money on.

This mess of a film is started filming in the 1980’s and then was eventually finished a decade plus later. Never mind that the actors aged we just had to go with it. The plot has something to do with gangsters in a small fishing village and it all comes down to a wild final fifteen or so minutes where the hero battles a killer shark who is threatening the livelihood of the village. The battle with the shark really has nothing to do with the rest of the film, but they bend the plot so it kind of does.

You won’t remember anything about the film except those final minutes which are so out in left field that that they are in another dimension. Bouncing between bad models and bad human performances these minutes are some of the most hysterical ever committed to celluloid. I have watched people get hurt from either laughing so hard they cramp up or fall out of their chairs and bang their heads.

I really dislike this film a great deal, and tend to only see the film’s final minutes every now and again when a discussion of truly bad films comes up. Being a masochist I decided to watch the film again for the Fantastic Fest screening and came close to plucking my eyes out of my head. Thankfully I had a cheese grater handy do I just shaved my legs with that to get my mind off the visual pain.

I can’t recommended this film except for the wacky ending.

Email ThisBlogThis!Share to TwitterShare to FacebookShare to Pinterest
Labels: fantastic fest 2022, india, not wfridayorth the effort