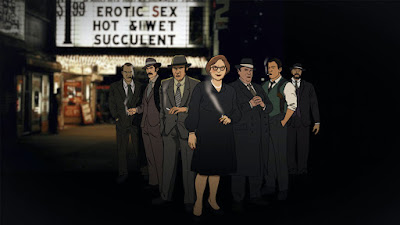 If you had any real curiosity about how the Deuce’s movie theaters were run you would have run across the name of Chelly Wilson who as the title of the film about her says, was the Queen of the Deuce. She owned a number of the porno palaces and made a mint  doing so. I had heard her name for years but I knew nothing about her until  The Queen of the Deuce appeared on my radar, and having seen it all I can say is it’s a hell of a film.
Chelly was a Greek Jew who got married at an early age because her father arranged the marriage. She swore to her father she’d marry the man but divorce when he died. From there she went through a series of husbands, numerous lovers, had several children, was openly gay, survived the Holocaust, made a fortune and changed people’s lives. It’s a wild and crazy life that no one would believe if it weren’t true.
I absolutely loved most of this film. As long as we are focused on Chelly this film is gangbusters. Chelly is a woman who was one of a kind and watching the film I regretted that she wasn’t alive to see the film celebrating her life. I say this not so much think sh’d enjoy the film, but more I might have had an opportunity to meet her.  What a great broad as my mother would say.
As good as the portions of the film where Chelly appears the sections with out her fall flat. About an hour in the film goes int a long history of adult movies in New York and Chelly disappears. Yes it’s informative, but it’s not Chelly. Worse the film ends with a coda from Chelly’s grandson that feels out of place because we really don’t know much about him. Actually out side of Chelly and her daughters the rest of the family are just talking heads.
While I could argue that the film could be trimmed, the central focus of the film, Chelly, is so magnificent that I’m still going to say this film is worth a look.
Posted by Steve Kopian at November 12, 2022