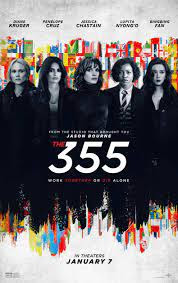 A team of women  has to track down an electronic device that can hack into any sort of technology and take it over, even to the point of causing planes to explode in mid air.

A cast of some the greatest actresses is wasted in a mess of a film that feels as though half of it was cut out and which is poorly edited. In all seriousness the action sequences don’t have the pop they should despite having turns that haven’t been done before in any film I’ve seen.

I have no idea what happened but this film is mess. I really don’t know why  because everything I it needs to work is here except in the assembly. I mean the cast is has Jessica Chastain, Penelope Cruz, Bingbing Fan, Lupita Nyong'o, Sebastian Stan, Diane Kruge and Edgar Ramierez, the set pieces rock and the maguffin is interesting and yes THE 355 just lays there and dies before our eyes.

A mess. I can’t recommend it even for free since its two hours you will never get back

Email ThisBlogThis!Share to TwitterShare to FacebookShare to Pinterest
Labels: action, not worth the effort, thriller, turkey