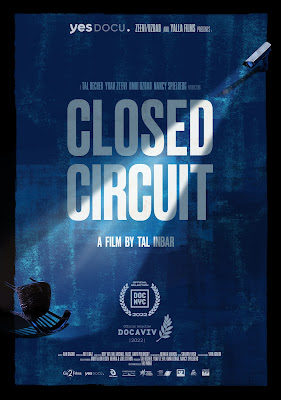 This is a recounting of the Sarona Market shooting in Tel Aviv in 2016. It is told via closed circuit security footage and the recounting of the survivors. We watch as the victims relive the events and reveal how they never really have gotten over the events.

One of my must see films for DOC NYC has turned into a slight disappointment.  It’s not that the film is in anyway bad, rather it’s more that the telling of the story ended up being a bit cold. The closed circuit footage blurs things at times pushing us out side of the events. It also doesn’t help that the victims are kept at a kind of distance from us. Where other documentaries would lean in  and bring us into the conversation director Tal Inbar keep us at a distance from the storytellers. We never are close we are simply watching them as they speak against a cold background of the market where the tragedy happened. This felt like a cold TV story instead of a tale told to friends.

I also grew kind of weary with the closed circuit footage as well.  After a certain point I disconnected as watching the same event repeated over and over stopped being emotional.

Its not bad but really cold.