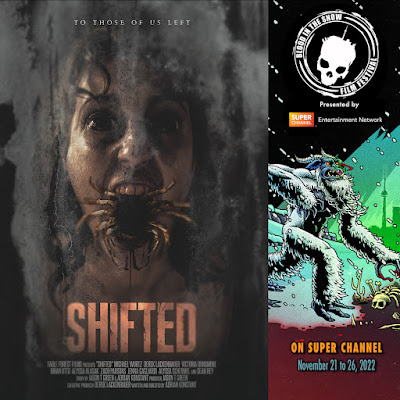 During an outbreak of a disease that turns people into monsters a group of neighbors stay together in one of their homes.  As the food and batteries begin to run down someone inside the house begins to kill the others off.

A very good story line is kind of done in by a very formal presentation. Shots are often set up a tableaus and a knowing shots picked by  some watchful eye. The result is the film feel staged rather than as a record of events playing out in some alternate world.  While  I completely understand that the film was shot for very little money and some of the choices are the result of shooting in someone’s home, the film is a bit too static for my taste.

AT the same time this story of murder and monsters is really good. Say what you will I stayed to the end because I wanted to know what was going on. I also loved the small touches that gave the film a sense of reality beyond the formal presentation.

My reservations aside SHIFTED  is worth a look.

SHIFTED plays on the Super Channel tomorrow as part of their BLOOD IN THE SNOW coverage. Details here

Email ThisBlogThis!Share to TwitterShare to FacebookShare to Pinterest
Labels: horror, The Blood in the Snow Canadian Film Festival 2022