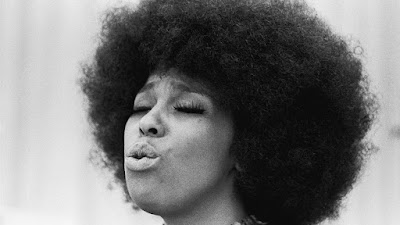 ROBERTA is not going to be what a large number of people expect. It is not a film full of music that blindly replays the hits and the good times until it’s feel good ending. The reality is this is a complex film about one of the great singers of the last half century. It is a film that isn’t music centric, but focused on the woman herself. Yes there is a lot of music but there is much more talk with the result this is a music doc unlike any other.

I’ve seen ROBERTA a couple of times now and I’m still pondering it. I mean that in a good way.

I was sent a screener because I couldn’t get to the world premiere at DOC NYC. I plopped myself down to see it and was kind of taken aback. I was expecting a breezy film and instead I got a film where we really delve into Flack’s thoughts and feelings.  This is not typical for a film like this and when the movie ended I fired it up and watched it a second time.

My reaction to seeing the film was I wanted to go give Flack a hug. I just fell in love with her all over again. I also felt that  I understood he r music more. This is just a super portrait.

If there is any problem with the film it’s that the film runs only 87 minutes. Normally that would be fine but there is so much to Flack that as I was watching the time pass there was a moment when I realized that there was still a lot to cover and not a lot of time. I wished the film covered some more moments that weren’t “big” (Clint Eastwood, Donnie Hathaway)

I really liked this film a great deal and recommended it.