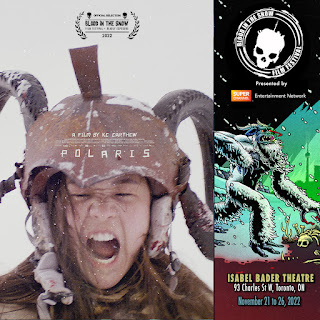 Polaris is a blast.

The film is female centric apocalyptic tale about a world shrouded in an eternal winter. The film follows a young girl who was raised by a polar bear. She is pursued by marauding warriors who like to kill.

A one of a kind film with it’s own vocabulary, this is a film firmly focused on the characters and we are better for it. This is a film we watch because we care about the people rather than just the plot. I say that because the plot line about a run to safety has been done before but it hasn’t been done with characters like this. They are people we like for reasons that are beyond just being heroic.

If you want to know how good this film is consider that its been kicking around genre festivals specializing in films full of blood and guts and gore. While the film does have action and suspense it’s not a typical hard edged film. It is rather just a super small scale dystopian tale that kicks ass.