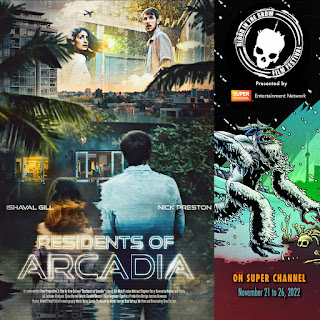 RESIDENTS OF ARCADIA
Influencers living in a well to do community find that right after a mysterious figure appears by their house a count down appears on their TV screens and mirrors. What it's for no one will tell them. A short time after they find themselves in the real world. They had been living in a simulation called Arcadia Canada where immigrants can go to see if they would like to live in the country. They now have a limited amount of time to get the money to go back into Arcadia or possibly face deportation.

Interesting, if not entirely successful film has a lot on its mind...well too much on its mind to truly be satisfying.  This interesting riff on the the immigrant experience also delves into virtual reality territory, notions of reality, influencers in the real world and five or six other plot threads. While I have to give the film a big hand for attempting to actually be about something, the truth of the matter is the film is actually about way too much and it never is fully about any of them.  In all honesty there is enough material here for a TV series and trying to cram it all into 83 minutes probably was not a good idea. 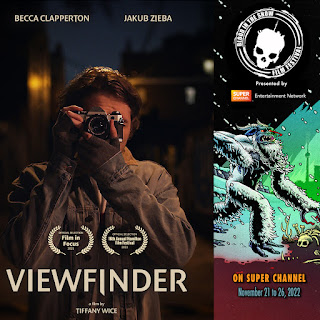 VIEWFINDER
Photgrapher finds he is being stalked by a being he can only see through the view finder of his camera.

Email ThisBlogThis!Share to TwitterShare to FacebookShare to Pinterest
Labels: horror, science fiction, The Blood in the Snow Canadian Film Festival 2022