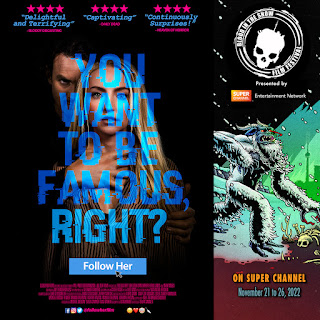 FOLLOW HER
An actress who live streams the weird encounters she has with people who reply to an ad ends up going to the country to help a writer finish a script for a thriller. However things are not as they seem and soon it all becomes a cat and mouse game.

Ever shifting film is at no point what you think it is. I got to the last frame of the film and I was still waiting for the next twist. Despite what you think this is not a film that you can second guess. One part comedy, several parts thriller and several more social commentary FOLLOW HER is a super film that's an absolute kick in the ass. While you may drift in and out regarding its tone, you will be glued to your seat as the film marches to its conclusion which will leave you rocked simply because its been such a rollercoaster ride of a trip 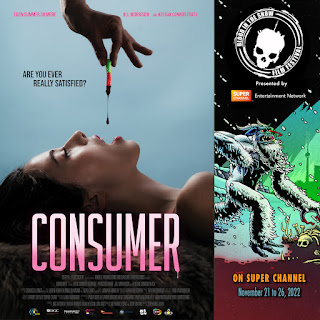 CONSUMER
13 year old girl turns to new consumer product in the hopes of being liked. DArk satire short has a hell of a kick. 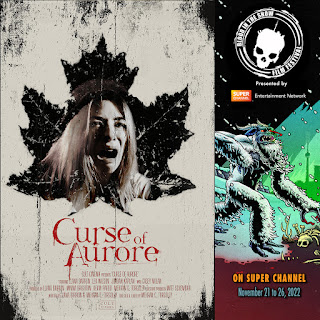 CURSE OF AUROUE
Found thumb drive has footage of a trio of filmmakers investigating the story of a dead little girl from the 1920's.

True case meets the found footage genre in a film that never really works. Blame the fact that not a hell of a lot happens over the course the the film. It's lots of talk with small scare attempts at making things creepy, but things don't really come together until the final moments. Blame the light attitude that much of the film has. Also blame the film  frequently subverting its own POV. It's clearly not found footage and it hurts the film.

Email ThisBlogThis!Share to TwitterShare to FacebookShare to Pinterest
Labels: capsule reviews, horror, The Blood in the Snow Canadian Film Festival 2022