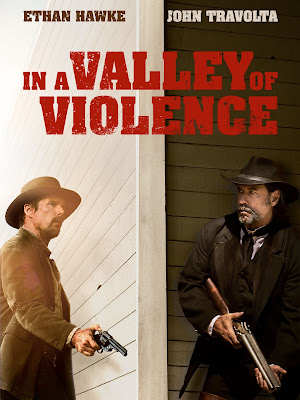 Ti West's western is a serious examination of revenge and violence when a drifters dog is killed and decides to get revenge on the three men  who did it, something that escalates into even more violence.

Violence begets violence and everyone behave badly in a film where there really isn't any good guys, just degrees of badness. While we tend to side wit Ethan Hawke's drifter even he isn't with out blame stealing a priests mule and behaving badly. Of course there are extenuating circumstances but even so it makes for an uncomfortable mix.

I vaguely remember this film coming and going from theaters back in 2016  but I didn't remember much about it other tan that. Sitting and catching on its run on HBO I was kind of taken aback since tonally the film is all over the place, one minute its  western, the next it sees to be sending the genre up and the next it's a morality tale with thoughts on revenge. The near climatic shoot out in the street wit John Tavolta in the middle is oddly funny and oddly not, writer/director West is clearly making a point about how the need to fill a blood lust will leave everyone dead. Its an impressive moment that kind of highlights the film's all over nature which I'm guessing many people unsure of what to make of the film and hence the much too low IMDB score of  six point something.

An impressive film this is something to search out especially if you don't want your typical western shoot'em up
Posted by Steve Kopian at November 08, 2022