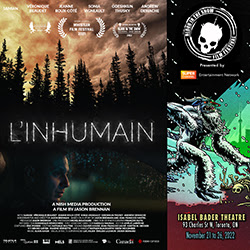 Brilliant surgeon finds his life crumbling. Just as he collapses from stress, his wife discovers he's having an affair and his father dies. Returning home town in the hopes of putting his life back together he finds that something unnatural is stalking him.

Seemingly by the numbers horror film turns the tables on the audience and becomes a wonderfully suspenseful tale.  Yes the set up is kind of as expected but where the film goes from there is not. This is a great film that trades scares for characters we care about with the result we end up wound tighter that if this had been a mainstream film. Best of all the visual effects are cracker jack and had me wondering how they hell they achieved them despite my knowing how they did it.

One of the best films at this year's Blood in the Snow is also one of the gems of the year in the horror genre.

Email ThisBlogThis!Share to TwitterShare to FacebookShare to Pinterest
Labels: canada, horror, The Blood in the Snow Canadian Film Festival 2022