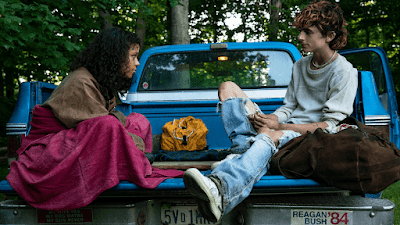 Young woman is forced to go out on her own when her cannibalistic tendencies result in tragedy. Along the way she meets other people like her as well as falling in love with a young man just like her.

The brilliant first half hour where the mythos of the 'eaters" randomly born cannibals that must consume human flesh, bones and all, is as good a horror set up as we've had in decades.  Promising a world where the monsters are regular people doomed to a lonely existence of consuming humans, it sets up the possibility for an entirely new horror universe.  It is as good a world building exercise as I have ever run across and I found my self leaning in to try and learn more about these "mutants" with super abilities.

The problem is that once the romance starts the film goes from ground breaking, to been there and done that. Largely squashing the eaters threads for young love and only bringing them back in order to provide shocks for the lovers to over come, the film becomes far less interesting as we know how this is all going to go  including  the ending because at no point does it veer away from the well worn paths or Checkov's rule that a Sully in each act points towards a final confrontation. Whats worse is that the film is so unimaginative that it repeatedly will infer events in the past, say about Lee's father, giving us just enough for us to imagine terrible things, only to then show us what happened finding out they were infinitely less that what was in our heads. My reaction was constantly "that's it?"

I know that this film has shocked many, but out side of the first hard turn, there isn't anything anyone who hasn't seen a bunch of the recent horror films, including the likes of NEAR DARK,  hasn't seen before.

Blandness aside I did like the film, I just don't understand the mad love some people have shown it. Horror fans will want to see it as it gives them a whole new world