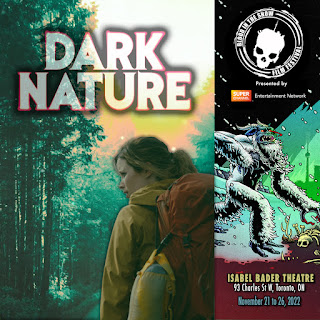 DARK NATURE
Joy is a woman who is still reeling from being in an abusive relationship. Her friend takes her into the woods in order to help her heal by being part of therapy group. However it soon transpires that there is something in the woods hunting them.

This is a good, but probably not to the level it should be ,story story of women fighting an unknown force.  While the cast is game and the idea is very good the execution runs a little too close to some earlier films. The film looks like five or six other films , which I won't name lest I put suggestions in your head, and you keep seeing it follow along similar lines. It also doesn't help that the POV shots of the thing in the woods are standard issue horror movie.

While this may sound like I don't like the film, the truth is I do. This is a solid and entertaining film, that is good enough that you will want it to be better. 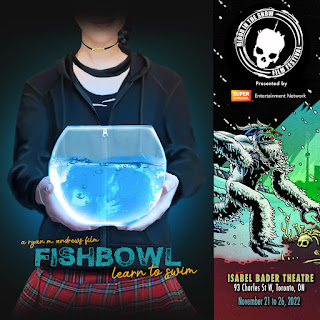 FISHBOWL
A rock star has to deal with a fan and his wife.

This is less a genre film than a straight  drama.  Its a good little film thats worth a look.

Email ThisBlogThis!Share to TwitterShare to FacebookShare to Pinterest
Labels: canada, horror, The Blood in the Snow Canadian Film Festival 2022