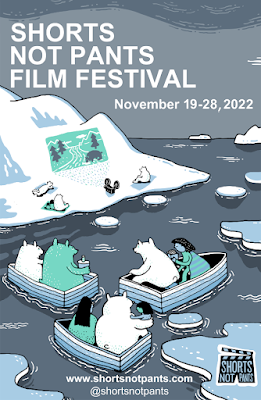 The Shorts Not Pants Film Festival is a blast and  half.

This year is the tenth edition and you need to either attend in person (November 18 to 20) in Toronto  or on line November 21 to the 27th.

Consisting of 57 of films from 22 countries, 39 of those being Narrative, 8 Documentaries, and 10 Animated films. Of those 16 Canadian films, 23 films directed by women, and 10 student films. More importantly  the vast majority of the films are really really good.  I spent a recent weekend going through the selections as if they were candy going from film to film to film one after another because they were just so damn good. How lost did I get into the films? I was up way past my bed time on several nights and I pushed aside DOC NYC promised films to watch the shorts for this festival.

The problem with the bingeing the films in the fest is I took really bad notes. As good as the films are across the board I can’t honestly review them all. Well I could, and I started to but the result was each title with a couple of words after them. That’s not fair to you nor to the filmmakers. So for me its easier simply to say buy a pass and watch them all. (Tickets and passes can be found here)

No really you’ll thank me.

I will add that the films that stuck with me are:

WARSHA is a film I've seen multiple times this year and it has delighted me each time. Its about a man who takes a job on a super tall crane for unexpected reasons.

THE FURNITURE is about a cleaning woman in an art gallery who doesn't like the exhibitions.

STAGNANT is about a the relations hip between a skinhead and his brother. I was moved.

SCARING WOMEN AT NIGHT is a look at two stranger walking at night. It examines notions of what we are friended of and how we see the world.

ON THE SURFACE a black woman living in Iceland ponders life. Its a beautifully animated meditation of life

LUW is a deeply disturbing short about a man who secretly has sex with another man...but is witnessed by a young girl.

KAYAK is a glorious animated film about a dad and his kid who go kayaking.

AIRBORNE is a stunning animated film about flora and fauna and flying. Wow.

CRADLE is a haunting animated film about the damage words inflict.

There are a tone more- but I couldn't list every film lest you think I'm daft- besides you really need to go through the selections and find some of the wonders on your own. 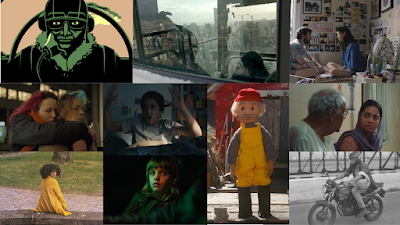 Email ThisBlogThis!Share to TwitterShare to FacebookShare to Pinterest
Labels: shorts not pants 2022