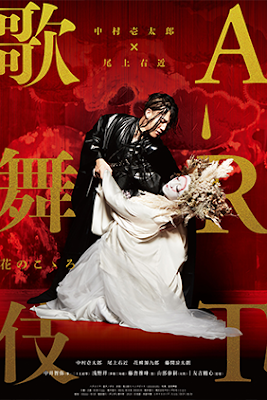 This is a filmed record of a live performance of a live show in Japan that was canceled when covid locked everything down. Instead of giving up the performers filmed the show and the result is a magnificent filmed record.
If you like traditional Japanese style theater with a modern twinge this film will delight you. I absolutely loved the film and replayed several sections because it just amazed me.
Forgive me for not saying more, this is more a filmed performance than a straight film. Yes it takes advantage of the film  medium but if you don't like watching live shows on a screen this won't work for you, on the other hand if you want to see something really cool give it a shot.
Posted by Steve Kopian at August 04, 2021