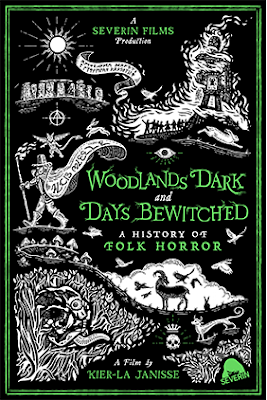 This history of folk horror in the movies over the last six decades is a film that will wear you down. Its not that it's a bad film but with a running time of three and a quarter hours it is simply a lot to take in.

This film begins with the release of the WITCHFINDER GENERAL in 1968 and goes on today. It jumps back and forth across time as it crisscrosses the world in an exploration  of all films that have to do with the old ways. There is tons of clips and lots of expert testimony from critics and filmmakers. There is so much here that you will be wanting to go through the film three or four times to catch it all.

As good as the film is there are some problems here and there. Some films are held up to be more important than they probably are. For example BLOOD ON SATAN'S CLAW, while a hell of a film may not have been as influential as WITCHFNDER and the WICKER MAN with which it's grouped. Some films aren't here but should be, especially with some of the non American and English films(apologies if I don't remember. I stopped taking notes early and was just watching the film because I found I kept stopping the film too much). The film also draws connections between films that probably shouldn't be there say the roasting of potatoes in WITCHFINDER to the roasting of the scorpions in THE WILD BUNCH. (Again there are others but I stopped taking notes)

Quibbles aside this is a hell of an achievement and it's a must see especially as a starting place for anyone who is interested in the history of horror.