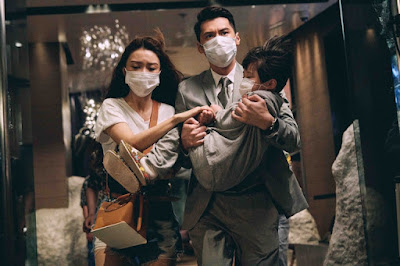 I have not been going into New York’s Chinatown as much as I used to with the result that my knowledge of Chinese and Hong Kong cinema of the last several years has diminished. Where I was way ahead of anything playing New York Asian I am now painfully clueless. I also miss the grand films that Hong Kong Studios would periodically turn out where a dozen or more stars would wander through some contrived comedy  and be silly. These films usually came out New Years and were not to be taken seriously. As a result they were a lot of mindless fun.

It is with a desire to see one of those films that I put on ALL U NEED IS LOVE an all star look at the Covid quarantine. The film is playing NYAFF and after seeing 12 very serious films of various quality I wanted something light. I got something light and laugh out loud funny.

The film is essentially a PSA stretched to 90 minutes. The point is to get some kind of information to the masses about the disease, which results in some serious bits, however mostly this is a just a very funny tale of people being locked up in a hotel for the duration.

Mixing action and comedy the film is almost certain to put a smile on your face. Watching the film at lunch I was laughing so hard at times I almost choked to death.  The humor is mostly low brow and almost always hits its target. The action is also extremely well done. There are times where bits are played straight for wow factor responses and times it results in laughs. I was delighted by both.

This is absolutely not high art but it is damn fun.

Its so good that I’m annoyed that the film isn’t playing with an audience since the film would be a blast live.